Twelve volunteer doctors from the Beep Fund Ltd, have received new kit thanks to funding from the public.

The new flame retardant technical response suits, which will be worn by all doctors when they attend emergencies, uses the charity’s new branding, which was created earlier this year.  The team of doctors had used the same uniform for quite some time but felt with the change in branding, which has heralded a new direction for the charity, it was time to have an update to their kit as well.

The new kit for volunteer doctors, which was made by Prometheus Medical (a leading supplier of pre-hospital emergency medical equipment) was designed by the doctors themselves and includes everything they should need in an emergency.

The doctors rely on their medical equipment to deliver frontline life-saving care.  The new suits will protect the doctors in dangerous situations, are made from flame-retardant material and are also waterproof.  Whether caring for a trapped trauma patient, operating under fire or responding to a major incident, the new kit provides effective personal protection, keeping the doctor safe, whatever the environment.  They also have purpose-designed slots, for their technical equipment, ID badge holder, kneeboards and are all made to measure.  They are also unique to the BEEP Doctors, which ensures they are easily identifiable at the scene of an emergency to all other emergency services.  Each of the uniforms costs £900, which was funded by the BEEP Fund themselves. 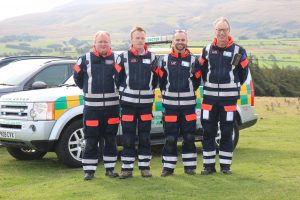 “Our new kit for volunteer doctors are fantastic and will be really useful when we’re attending an emergency.  The fact they are protective, water-resistant and have kneeboards will really help us do our job more effectively.  It is thanks to those people who make generous donations to the BEEP Fund that we are able to buy equipment like this.  Without the support of the local community, donations and fundraising we would really struggle to keep our equipment in good condition, or be able to afford new bits of kit.”

The BEEP fund began in 1994 with only 3 doctors and covered a 15 mile radius of Penrith.  Now there are 10  volunteer doctors on the team who cover the majority Cumbria, including the north and west of the county as well as south west Scotland and south Lakeland.

The Beep Doctors are all unpaid and are on call 24/7. They attend serious incidents in the county including road traffic collisions, farming accidents or other life-threatening medical emergencies, as well as major Incidents.

Everyone who is part of the Beep Fund is unpaid, but there are ongoing costs for continuous doctor training, the updating of protective clothing and medical equipment, and maintaining the specialist vehicle. It is essential that the charity continues to raise funds to support this.